Teaming up with T2XI creatives Marc Levesque and Dan Cantelon, alter ego helped Moosehead celebrate both Canada and its own 150 year history all on the canvas of a beer bottle label. A team of over 15 designers, vfx artists, producers, and colourists turned this project from concept to final delivery in just under 14 weeks. The brief was simple. Each label on every bottle travelling down the assembly line would contain a different frame of animation. When the conveyor belt moves at the correct speed the bottles will pass by the camera and appear as if that animation on the labels is moving. Essentially the beer bottle labels would become a living film strip. All we needed to do was build a multi speed 50ft bottling assembly line and stick labels on over 1440 bottles of Moosehead.

We began with a variety of tests to figure out the intricacies of speed and stop motion. Director David Whiteson: “There was a real fine line between running the conveyor belt too fast or too slow. Each exhibiting a completely different result. Too slow and the bottles appear to be travelling backwards, but too fast would make the animation unclear. It was a delicate balance.” In conjunction, our team of designers lead by Ed Deng began designing the label animation.

“Working closely with T2XI we went through various designs and ideas. Considering the size of the Moosehead labels and the stop motion zoetrope effect, there were challenges creatively and technically. In conjunction with camera frame rate tests we went through similar frame rate tests of animation to see which ones would best showcase the stop motion. Ultimately we decided to animate the graphics on twos. After that the focus became creating designs for each historic moment that were both iconic and recognizable.” Says designer Ed Deng.

Cinematographer and colourist Eric Whipp: “As soon as Ed had anything resembling a work in progress we’d print out each frame of the animation on white paper and tape them to Moosehead beer bottles. We would run over to our studio, place the bottles on the one section of conveyor belt that was built and shoot a speed test. This was an invaluable learning experience. Every bottle had to be perfectly placed on the assembly line at the exact same distance from each other in order for the bottles to line up perfectly. This would ultimately increase our setup time of each shot on the shoot day.”

Taxi Executive Producer Steve Emmens says: “We needed to surround ourselves with creative thinkers who had a degree in math – joking – not really. A lot of math was involved – and having failed grade 10 math – twice – it wasn’t going to be me. David Whiteson along with Eric Whipp and the amazing team of producers and animators at Alter Ego were the obvious choice. They delivered an amazing spot that we are extremely proud of.”

With a project this highly complex we needed to have an extremely well thought out animatic and shot list for the day of shooting. Director David Whiteson: “We didn’t have time for multiple takes. There were so many variables to consider. No motion blur, an enormous amount of light and the extremely slow speed at which we were running the conveyor belt meant it would take minutes to shoot just one shot. I remember three minutes into the first take it became apparent to everyone exactly what we were in for and how long the day would go.” The shoot day was ambitious for sure. 40 shots, 2 cameras, and thousands of bottles standing by but we loved the challenge and ended up with such great footage.

The task of editing was handed over to Rooster editor Christina Humphries. “It was wonderful to have the opportunity to work on a project which was truly a collaboration of all the creative fields. The challenge in a project like this, where the story is told via the artwork, is how to visually elevate the story. Having the trust and support of the T2XI and Alter Ego teams made my job that much easier and allowed me the freedom to explore new ideas throughout the edit.” Says Christina.

Christina is incredibly technical and has great experience with stop motion animation, but it was the way she edited this puzzle together that brought it to life. “When I saw Christina’s first cut it exceeded my expectations. She was able to capture the timeline story and showcase the history of Canada so well. Her technique of layering so many shots together added so much depth to the entire spot” says David Whiteson. Above all she completely understood how to take minutes and minutes of footage and effect it in a specific way to make it feel like stop frame motion. Which is a huge task in itself. Every time you wanted to try an alternate shot it involved processing the footage, rendering it down, assessing if it was working and then either adjusting or placing it in the cut. It was a tedious process.

Once we began playing and time warping each shot so that the bottles felt as if they were moving down the line and that the focal point was exactly where we wanted the viewer to look other issues arose. It’s never easy when you have to time warp minutes of footage by over 10,000 percent. No matter how much time we spent on set placing the bottles mathematically apart from each other the slightest deviance and the bottles began to jitter and shake far too much or simply move in the wrong direction. The team at alter ego, wiggled, shifted and manually massaged each shot to create a seamless look.

With all the frame by frame pain aside, the entire process from start to finish was incredible. It was a huge undertaking and we think the entire team did a fantastic job and are very proud of the final result. 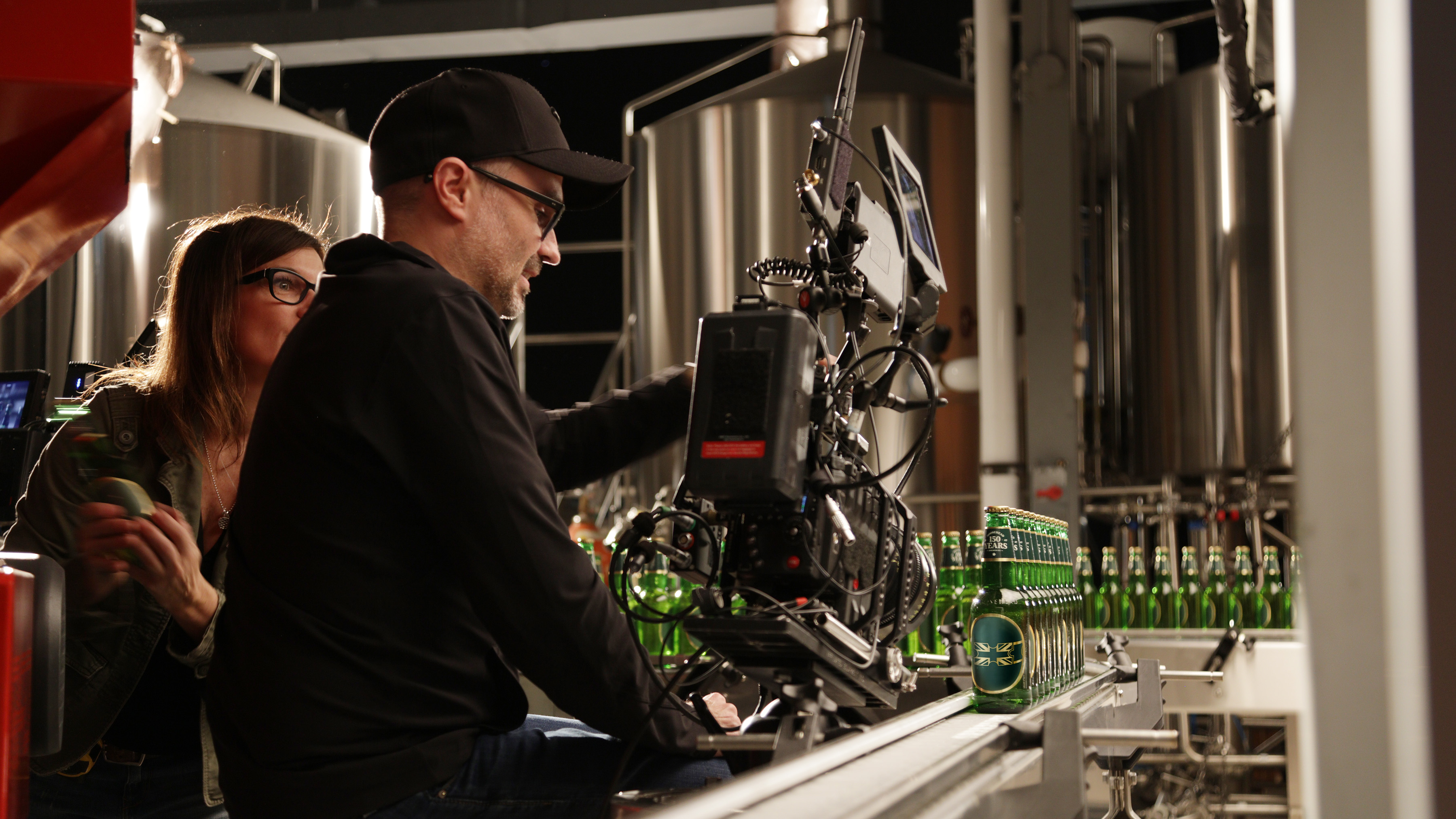 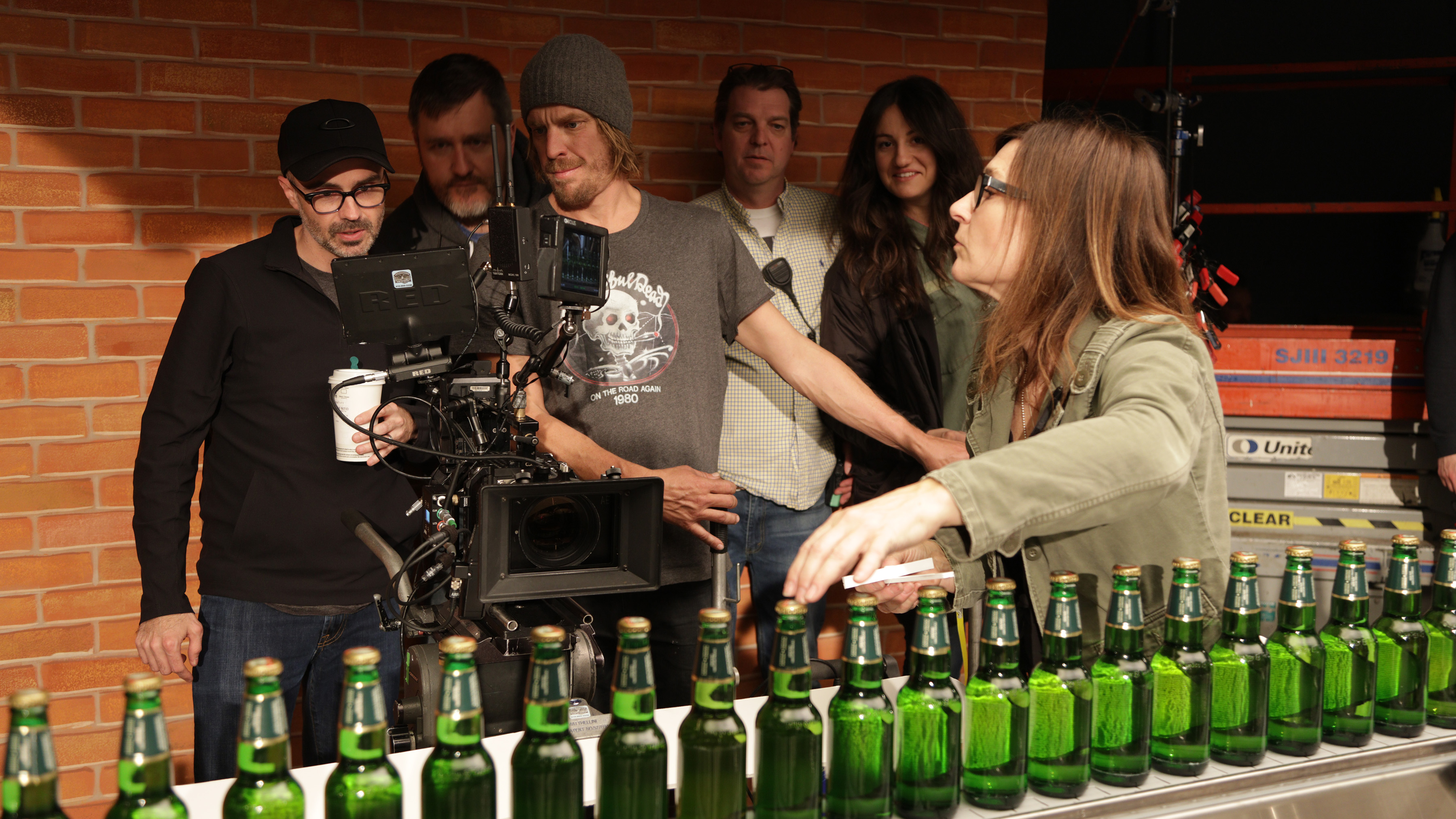 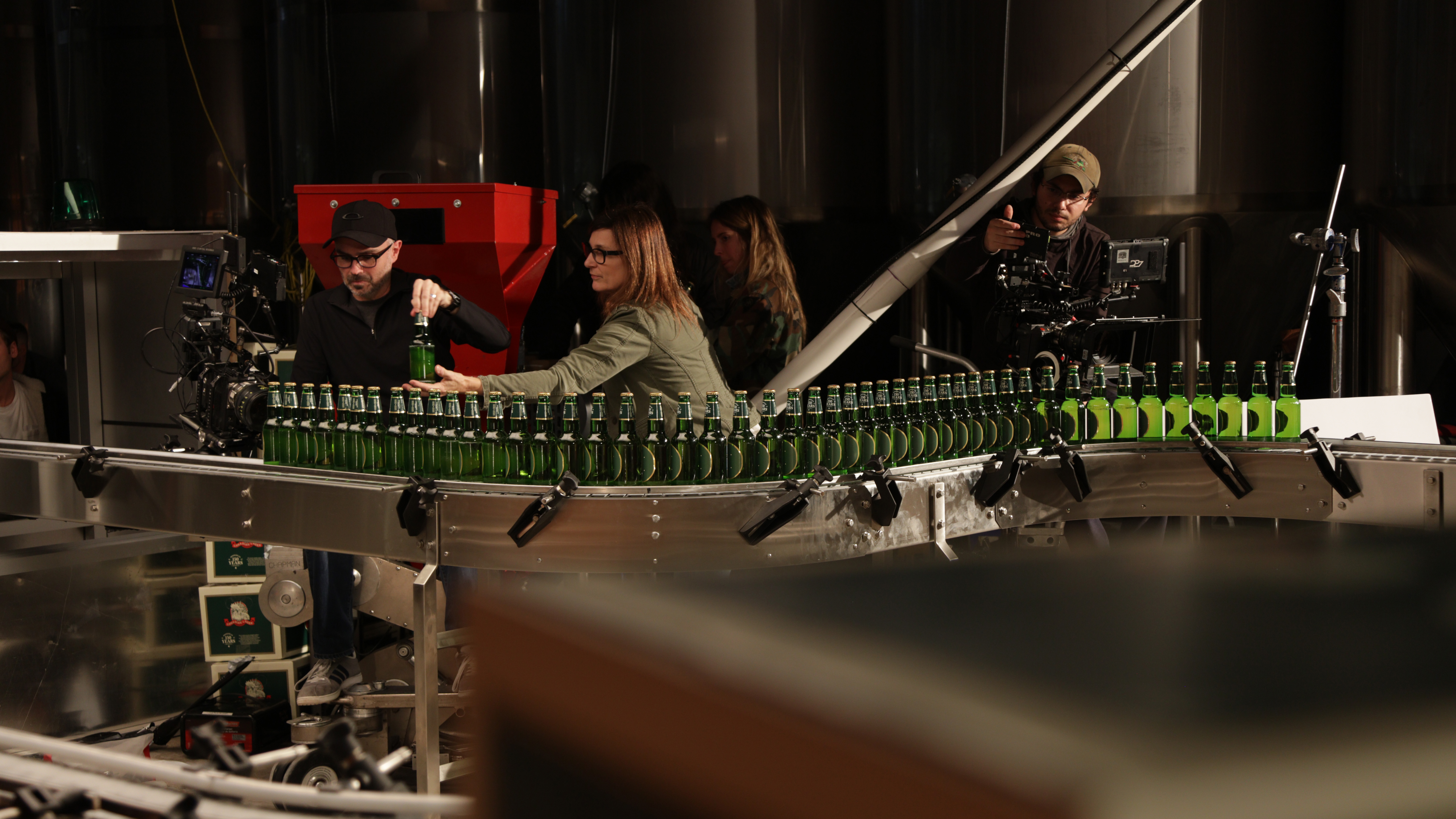